If the minimalist, extraordinaire Steve Jobs were still with us there is one thing I know for sure, and it’s him and 2 Chainz would be kindred spirits.

2 Chainz transformed from a virtuoso of poesy into the embodiment of extravagance via simplicity when he revealed the album art for “Based on a T.R.U. Story”. It’s as if he channeled the energy of Jobs’ & his chief designer Jony Ive. A black backdrop and two yellow gold chains command the attention of shoppers. In addition, 2 Chainz places his name above the album title in distinct but small letters in the lower left hand corner, and in the opposite corner sits the obligatory parental advisory stamp. The other details seem to melt into the background instead of being an eye sore. While some artists would feel the need to plaster their moniker or album title front and center on the cover, the rhymer formerly known as Tity Boi saw through the pitfall of such a move. His name doubles as a ubiquitous calling card in the rap world, and now permeates everyday life. So in a genius move that requires a person do less instead of more, he went with a clear visual representation of his rap name, calling card and personal style choice. It doesn’t matter what the name of the album is as long as people recognize who it’s by immediately without any prompting. Truly genius and Jobs-esque in execution. 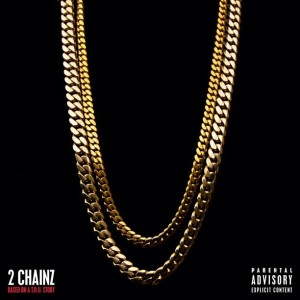 If Steve Jobs released an album, this would be the cover he’d swoon over.

This could mark a long-running theme in 2 Chainz album releases just as Apple wraps products in stark white or brushed aluminum and throws in a plethora of clean edges. Every album could and should feature some combination of a duo of necklaces placed elegantly against a solid background.

I can imagine it now. Jobs walks through the Apple offices as someone works on a new iteration of the iPad as Jobs peers in and says “It’s shit!” The response of the worker in an effort to appease he of the turtleneck: “Truuuuu!” Jobs then makes his way down the office and shoots back “have it right tomorrow, 2 Chaaiiinzzz!” in the way only a person of his stature could. I wouldn’t be the least bit surprised if Jobs would have included a preloaded copy of “Based on a T.R.U. Story” on iPhones & iPads from the release date onward. It would be a nod to his modish twin spirit.

All of these things are pretty self-apparent, even to an Android and Windows user such as myself. These two would have been quite the power-friendship in the industry. Throwing ideas off of each other, and calling one another on bad decisions. There was no way Steve Jobs would have let 2 Chainz feature Kreayshawn on “Murder”. Jobs would have told him “it’s absolutely the worst shit you’ve done,” and he would have meant it. 2 Chainz would have sat back and sipped some more from his red solo cup while adjusting his unsnapped backwards facing snapback and then agreed.

2 Chainz’ lyrics reflect the same thinking that went into the decor of his cover. They’re unreserved in subject but are delivered with a practiced reserve. His best lines scream simplicity while evoking an overflow of educated thought. The more you listen to him rap the more you realize he’s the embodiment of modern philosophy. He is, in truth, a walking display of art. Every action is carefully measured to elicit emotional reactions. It’s the same thing with diehard Apple followers. No product from the Cupertino based company hits shelves without the tiniest of details receiving the greatest of consideration. The end result is an explosive acceptance by fans. Jobs would be proud. He could put the 2 Chainz album alongside a Macbook Pro and trust that no one would question the decision.

The next step for Mr. Chainz is to join the Money Team with Floyd Mayweather, 50 Cent, Justin Bieber and HHH (I’m not sure who else is in the elite club). It’s the next step in his progression as a true source of inspiration for the world populace. As I’ve stated before, the Money Team will lead us into a new era of greatness. I’m pretty sure 50 is already calling 2 Chainz on his special money phone. 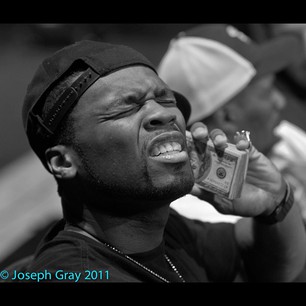 The Money Team Phone is sort of like the Bat-phone. Only a select few have the number.

Feel free to discuss this in the comments.