Q & A number 6 in the Top 10 Series brings us Amy Bond (@May_Bombs) who follows up her husband Maddison’s (@maddisonbond) interview. Amy gives us a more detailed account of her relationship with Maddison, a special occurrence on her wedding day and stuff about the culinary arts. She wanted to be drunk for the interview, but I wouldn’t let her. 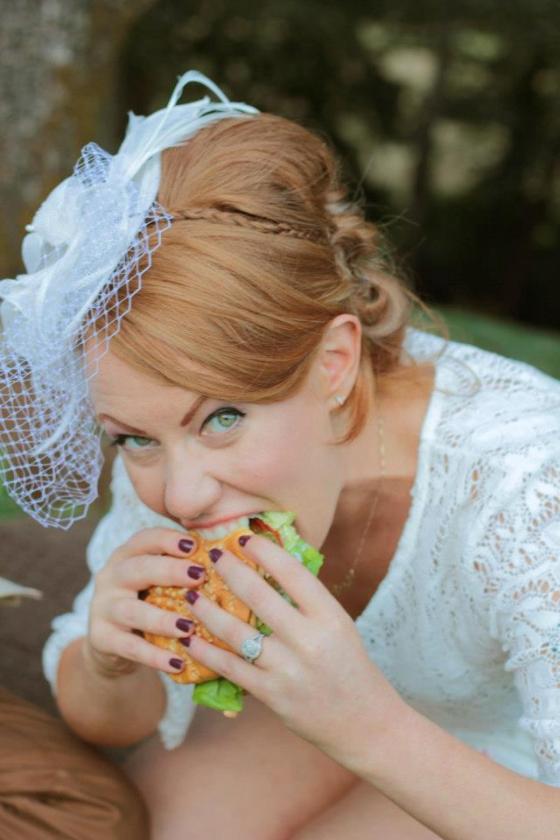 I hate this question.

I don’t know that I have a tweet style per say. I am more of a random-whatever-is-on-my-mind tweeter. I try to be funny most of the time.

If  you want to know what my original tweet style was, I can tell you that.

I got a Twitter originally so I could just bitch into vapid space. I wasn’t following anyone, no one was following me and I just complained about crap that I didn’t want to complain about to my friends. It was my way of not being a drag. THEN EVERYTHING CHANGED. I still bitch a lot though.

What role does Twitter play in your everyday life?

That really depends on what day it is. For example, if I’m hungover I generally won’t directly tweet, I might inadvertently tweet Instagram pics of my food however. Hangover food is the best. I also go in waves with how often I involve Twitter in my day to day internet life, some days I’ll go to jail twice and some times I won’t tweet for several days. I like to login to see what everyone is chatting about, if I’m interested in the topic I will join. Currently Twitter for me is based around Winston.

I recently interviewed your husband and fellow Portland tweeter, Maddison. He said you could give a better account of how you two met and your relationship progressed. So, can you?

I can try. So there was this dude with a really cute name that hung out with my brother a lot. As he got older I developed a crush on him, I couldn’t when we first met (he was 17 and I think I was in a relationship). I would ask my brother to invite him over and then I would make really cute food for him, charcuterie plates to be more specific. We started really developing a friendship over science, we would argue and agree on so many things and teach each other. It was a sweet beginning. Then people noticed we started hanging out a lot, every single day in fact, and we thought that was funny. So. I came up with the idea to get fake engaged. Have you heard about the fake engagement?

Amy and Maddison on their big day.

No I haven’t. Can we hear about it?

Once we noticed that people noticed us hanging out together a lot I came up with the brilliant idea to trick them. We were going to start checking in to bridal shops and the courthouse. We were then going to have our friend come out and stage an engagement party where Maddison and I would get really drunk and then end of the night there would be a picture of me over the toilet holding my hair back and you can see the ring. We ordered wedding rings, his was engraved “h8rz guna h8” and mine was engraved with “i did it for teh lulz”. We were then going to check into the courthouse and get pictures of us hungover on the steps and post it on FB “Just Married!” then a week later start checking to divorce counselors. Obviously, none of this ever happened because we actually started dating and then we actually got engaged and actually got married. We still have the rings.

Maddison said marriage won’t affect his tweets. Is this true for you as well?

I don’t know how it would. Like he said, I was the one that convinced him to get an account. We started making friends via Twitter together. If anything, Twitter makes our relationship better, we’re very social people. I do call him husband though, and I think that’s pretty darn cute.

You recently locked your Twitter account though. Is it safe to say marriage has already impacted your account in subtle ways or is something else behind this? (I know you’re not fond of new followers)

Ha! The reason behind the lockage is really boring. We’re dealing with our caterers still and I don’t want them to be allowed to see if I full on libel their name via Twitter. I drink and tweet far too often, so there is a good possibility that this will happen. Just trying to cover my bases. I will unlock my account once the dust has settled.

What did it mean to have fellow Portland tweeters attend your wedding?

It meant a lot. Really. In a world of flaky people, they came through and they have been a solid group of dudes that we always look forward to hanging out with. Yu (@YucciMane) is our main man, he treks hella far just to spend a couple hours with us while we call other Tweeters. Sometimes I wish we could adopt Sean (@SHighKinNBA) so he could live closer. 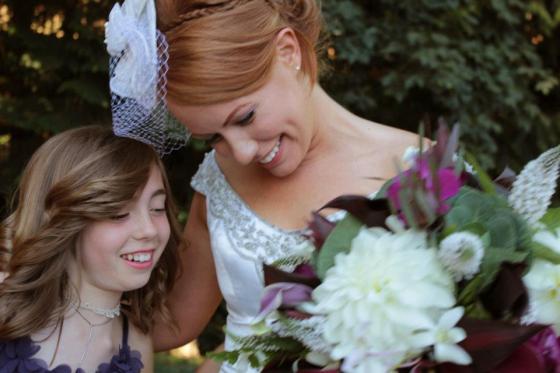 Amy and her birth daughter on wedding day.

Your daughter attended the wedding and that was a special moment for you. Could you explain how much that impacted an already special day for you?

That was a crazy huge deal. When she was born and I knew I was going to give her up for adoption I only dreamed that some day she would be my flower girl. I never expected to meet the love of my life and marry him before she would be considered too old for that role. It meant a lot to me that my friends got to meet and see her, a lot of people were there that were with me throughout the struggle of giving her up. A lot of people didn’t have any idea that I had a daughter, I don’t just come out with that info usually, so it was interesting to hear their reactions. It was special to have her there and to share her with my friends and family on such an amazing day.

Maddison is a talented drawer, but your talents lie in the culinary field. What do you enjoy about cooking?

It’s probably a control thing. I like that I have full control of how everything will turn out. Unfortunately, since I make my own recipes, sometime I have to take full responsibility for my follies. I love the colors, I love chopping, I love the smells and I love cooking for friends. A night in with friends, my food and wine, is the best kind of night for me. I feel like food brings people together. One year I had over 20 people over for Christmas dinner, I made a ham, turkey, stuffed mushrooms, mashed potatoes, gravy, green beans with bacon, rolls and a plethora of hors d’oeuvres. 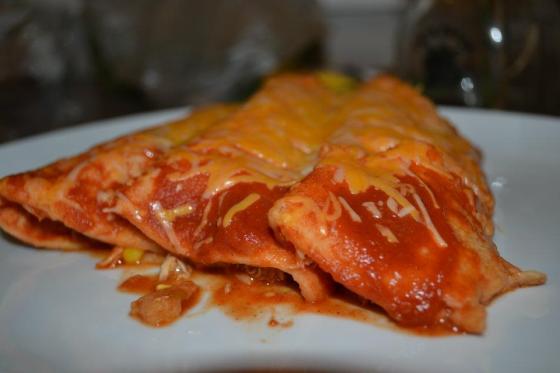 Some of Amy’s culinary explorations (Enchiladas)

#ArticleSquad, what are your ACTUAL thoughts on this group?

Maybe a different question because I’m not actually familiar.

The Portland Trailblazers, what feelings do they evoke in you?

Mostly good ones. I know that we haven’t been the best team but, as a born and raised Portlander, I find being a fan for me really means hometown pride. You may have heard that we are the best fans in the history of ever, it’s true. I understand the frustration with the team, with so many ups and downs and just heartache but in all we love our Blazers through and through and make sure they know it. Also, they’re some of the nicest dudes on court, I’ve had multiple conversations with players and feel like they take the time to really acknowledge the fans.

#BasketballTwitter, what are your thoughts on it?

Oh geez. I knew this was coming, it’s an unusually loaded question. I like the whole fam idea of it, there’s a lot of connection and it’s hardly basketball related. I don’t remember the last basketball related tweet that I even made, probably something about #TheFeltdown, I can’t wait to get back into it. I’m happy that I’ve met all of these awesome dudes and ladies across the nation and that we all have a common interest, I’m also happy that we don’t exclusively discuss sports. It’s such a mix of conversations and ideas. I do like that I’ve been called “Twitter Mom” on multiple occasions, seems fitting. My thought process with this question is super jumbled, sorry about that. I love you all (mostly). 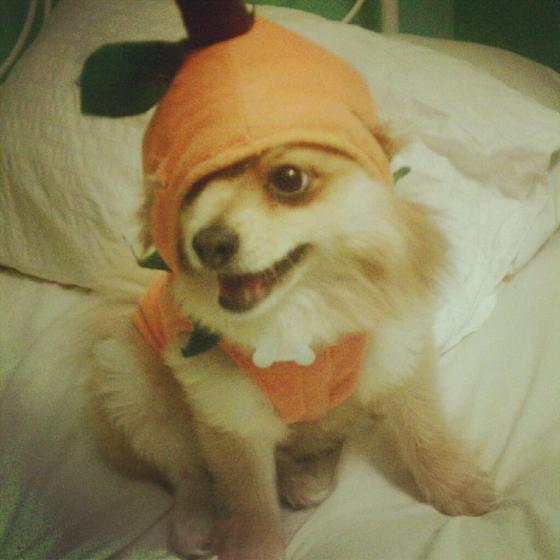 Is Winston next to you right now? If so, what’s he doing?

He’s currently on our couch behind me, he just hopped up and laid down. He’s currently looking longingly into my eyes…or he’s falling asleep, I can’t always tell.

He’s being cute would be the short of that.

Was this fun enough that you would do it again?

I would definitely do it again, two thumbs up! But next time I would have to be drunk, I’m way more interesting when I’m inebriated.