Russell Westbrook is both mesmerizing and the cause of lots of head scratching, and he’s often both of these things within a two play span. His accomplishments burn bright when he’s on the biggest stages, but his missteps outshine the sun on those same stages. But when you think about it, outshining the sun is never a problem unless you hate fun. It is often said that without evil there is no good, and without darkness there is no light. These sayings extend themselves to the Oklahoma City Thunder, because without bad Russ there is no Bestbrook.

Westbrook is feeling it

“W3STBROOK!!!!!!!!!” so go the tweets after Westbrook sinks a timely three in a close playoff game. Russ, seemingly never tired, captivates fans of all teams when he’s dialed in. There are few players better than Westbrook when he’s doing all of the right things. This is an inarguable law of the universe. There are games when even the anointed one, Kevin Durant, watches from a state of pure awe and ecstasy as Westbrook does his best to lift the Curse of the Based God. On some nights Russ blows the curse away, while on others the curse overshadows his most heroic efforts.

But then there are the other nights. These are the nights where Russ’ ill-advised three falls out of bounds without touching rim nor backboard, where his fastball pass careens off of a teammate’s hands and into the first row, or where Russ looks off an open KD to do it all on his own. These dark moments are the ones which cause fans to cringe while simultaneously yelling at their TVs.  These are the plays that give fuel to the conversational fire that is “Westbrook is definitely holding KD back; they should’ve gone with James Harden”.

But remember, without pain and suffering there is no joy.

Westbrook plays hard, and in doing so he sometimes does the thing that pushes him closer to defeat than victory. This is pain and suffering. Russ doesn’t just play hard; he goes for broke. He wills himself to keep going no matter what. Eventually, his indomitable will causes a shot to go in or a pass to thread the needle. This is joy. This is Bestbrook. Through the darkness comes the light, and his is the light of a thousand suns.

The plays you deride Westbrook for are the plays that make him more than just a player fettered to binary results. With Westbrook the outcome isn’t simply good play or bad play. It’s good play, bad play and fascinating. The bad plays make the good plays look all the more superhuman. The good plays make the bad plays all the more perplexing. The bad plays also feed into the enchantment of such a volatile player. When he ties the game, you’re on your feet. When he blows a layup you’re just as excited. You want to see which Russ will show up the next trip down the court. 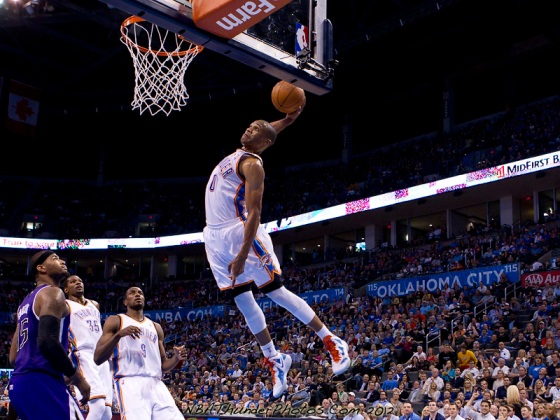 Westbrook lives outside of the cleanly labeled black and white because he’s human. His mistakes endear him to us because his mistakes mean the chance for sweet redemption. This wouldn’t feel right if it constantly happened to LeBron on a night by night basis, but that’s because we’d be able to sense something is wrong with his programming. Androids either work or they don’t; that is, they’re purely binary. The flesh of man, in contrast, is supremely fallible and provides for variables.

We don’t get the same joy from KD’s struggles and subsequent artistry because we can tell that he too is not of flesh, but of science labs. His final operating system is still being tweaked to handle things like standing in one spot while he doesn’t have the ball. We expect perfection from Durant and often attribute any of his shortcomings to his earthborn partner in crime. Westbrook is the anchor to KD’s docked ship. This is the way the story is told, but maybe it’s the other way around. Maybe the evolving Durant is the force that’s holding back the joy Russ can bring; but, nevertheless, he’s a necessary force. We must see robot and human side by side. The thing that makes the original “Robocop” such a classic is that it’s human frailty melded with engineered, metal perfection. This is essentially what this dynamic duo has delivered to us.

They say beauty is in the eye of the beholder. Well, the beauty I seek is flawed. If it’s beautiful to me, it’s perfect.