“The Place Beyond The Pines” positioned itself as a sort of “Drive” rehash, which I was fine with, but gave me so much more.

Before I even saw the trailer for “The Place Beyond The Pines” I knew I wanted to see it. Advanced descriptions revolving around Ryan Gosling, motorcycles and crime were the right ingredients to pique my interests. The feeling was solidified after the first trailer made its rounds. It seems liked “Drive” all over again, and I wasn’t disappointed in that. I thoroughly enjoyed the beautiful cinematography of that film, and ‘Pines’ felt as if it would offer the same lush scenery but with two-wheeled mayhem instead. So after so much build up, I definitely attended the second day of showings after the film was finally given a wide release.

Gosling portrayed his character exactly as I expected he would. He glided through the film in a purposefully aloof sort of manner. He was a bad-ass and knew it, and he knew everyone he interacted with knew it too. But beyond being one of bad-assedness he also had an awkwardness about him that provided just enough vulnerability to make him a more complete human being. The awkward behavior quickly transitions to the very weird relationship he has with Eva Mendez’s character, which is great because she’s often quirky due to unintended bland acting. Mendez actually excels in ‘Pines’, and this is something I didn’t expect going in to see it. Bradley Cooper, portraying another main character, provides a great opposing performance to what Gosling gives us. Cooper knows how to communicate states of anguish, being sure, false bravado and edge teetering with minimal effort. He’s the bookend to Gosling with everything else being so packed in that the movie is bursting at the seams. 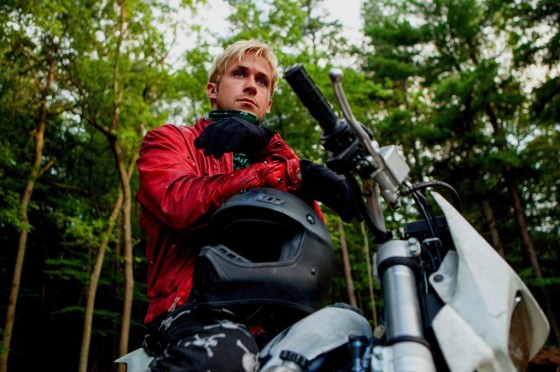 I can’t let on too much about what I enjoyed about the movie, because I don’t even want to hint at what turns are in store for you. I will say that Gosling, as the star attraction, is used in two very opposing ways as a catalyst for all developments. I got the “Drive” themes where I expected to, but an entirely different story arch was given to the audience. This film, while linear, is a layer cake of progression.

“The Place Beyond The Pines” is undoubtedly the film of the year so far, and I think it will be easily remembered as the year progresses. The wow factor of it is that it actually has two climaxes. Although the true definition of a climax would mean there can only be one, and that the other is really part of the rising action, I’ll say there were two in this case. You not only see the first one coming, but you expect it. The fact that you hit such an emotional high as a movie goer, and then you’re left to go through it again is a pretty great experience.

I’ve already gone over my self-imposed word limit for this miniature review, but I’ll say this is an absolute must see. I didn’t go into much detail, and I think it’s only right that I didn’t, especially in this case.