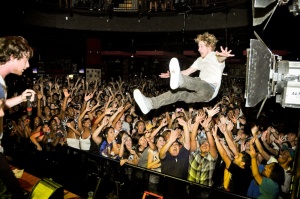 The title of this post and Asher Roth himself would have you believe he’s been ill since the summer of 1995 (the debut of Nick in the Afternoon which Stick Stickly hosted). This is an assertion that I can’t validate as I had only turned 7 that summer, while Asher turned 10. We were just kids with the eventual rapper not being a rapper just yet, and me not truly being able to grasp the ill factor. Regardless of those circumstances something happened between now and then to establish Asher as one of the preeminent MCs in the game. In that same time span I honed my ear for what I consider to be truly good music. In 2008 that ear happened upon a mixtape titled “The GreenHouse Effect” by a white rapper who was building buzz on hip-hop blogs by getting cosigns from people such as Jay-Z. I downloaded it and was definitely impressed. A collegiate rapper with witty and intricate rhymes pumped through the speakers. Not only was this a mixtape, but it was a certified offering that was hosted by the widely known pairing of DJ Drama and DJ Don Cannon. It wasn’t a perfect 10 out of 10, but there were tracks that caught my ear immediately. I smiled from ear to ear listening to this kid rip beats from hit songs like ‘Dey Know‘ (turning it into Dey Know Asher). He was funny & introspective at the same time which is a great combination in a artist. ‘The Lounge‘ showed a more serious side that was deeply thoughtful about the social constructs of race and class in hip-hop.

Move forward a little bit and “The GreenHouse Effect” had garnered the proper amount of buzz. Asher signed a major deal with Universal Records, and prepped for his 2009 official release “Asleep in the Bread Aisle”. His first single was ‘I Love College’ which did pretty well. Every college party had the song on the playlist for the night. Things were looking up for Mr. Roth even with less than stellar record sales. The truth is things were going off the rails. The mainstream audience didn’t hear anything from his mixtape effort so his initial introduction as a fun loving, beer-pong playing, college white boy was toxic to his success. He was written off as a novelty act by the top 40 crowd. Many others including myself knew better than to turn our backs on Asher. The album was flawed, but still displayed the things that drew me to his music. On the last two tracks of the CD Asher went back to being himself and ended on a blackout inducing highpoint.

To the rest of listeners Asher disappeared into oblivion, but in reality he was retooling by going underground. He said no to what labels wanted and focused on being the hip-hop head he was. 2010 saw the reemergence of the floppy haired lyricist with a new mixtape fancifully named “Seared Foie Gras with Quince and Cranberry“. With a title like that there’s no mistaking that he was here to express himself to the fullest. The sound of the project was more cohesive than past efforts which brought excitement to his fans.

Then a more pivotal moment came later in 2010 when it was announced Asher would be part of super assembly of rappers that was interestingly called the All City City Chess Club. The group included but wasn’t limited to Lupe Fiasco, The Cool Kids, Diggy Simmons and B.O.B. The eclectic group released the singular record ‘I’m Beamin’ Remix‘ that caught the attention of most who crawled hip-hop blogs. The first verse of that record belonged to none other than Asher Roth, and damn was it a verse. Asher went with a very abstract, out of body type rhyme and it blew my mind to pieces. It was hands down the best verse on the song to me, with Lupe’s verse being the closest competitor. Why was this such a momentous moment to both me and Ash? For one thing it meant he clearly had the ear of his fellow MCs, and secondly it pointed to Asher nailing down his style perfectly. He had finally cleared his lane and thoroughly owned it. Right before the end of 2010 fans were presented with the free EP dubbed “Rawth” that played on his last name. Another release and another improvement. If there was a way to describe Ash’s year it would be furious flurry.

2011 featured Asher sprinkling guest verses here and there, free standing songs and speaking of a later release. The release eventually came in the second half of December with “Pabst & Jazz“. Excited can’t describe the anticipation I felt leading up to the release. Some of the songs had been released well in advance to wet the appetite, and my mine was turned into a ocean of hunger.Once I had the full release I enjoyed it from start to finish. I had been blessed with a 10 out of 10 free release that played like an album. As a matter of fact I’m listening to it as I type this. Two months in and not one ounce of freshness has been lost. I’m undeniably confident I’ll be listening to this for years to come which means it will have passed the litmus test of classic by that time. As the title of the mixtape might suggest it partly showcases a mix of laid back music with the smooth melodies of jazz. Some of the songs are more stripped down in the production department which give them a throwback feel. Wordplay is clever & meaningful throughout. Every song keeps me intently listening. A welcomed staple is interesting name drops. Many rappers (The Game is notorious for it) throw out famous names in their raps to make various connections. Asher has  turned this into an art form by name dropping known, but not necessarily currently relevant names like Magnús Ver Magnússon or Chuck Knoblauch. How many times do those two guys show up in raps? Exactly, not many.

All this is to say Asher is here and he’s killing a lot of your favorite rappers. His lyrical prowess is impeccable right now. Fully realized projects aren’t always the end result that fans receive, but this isn’t the case here. The content and the beats sound bonded in every possible way. When it comes to visuals the videos have been knocked out of the park lately. So far three videos have been released for “Pabst & Jazz” and all of them were uniquely perfect for the sound. If you’ve made it this far into the post you may wonder why I didn’t address the white rapper thing other than in passing, and it’s because it doesn’t matter. I don’t get entangled in comparing every white rapper who comes out just like no one thinks twice about comparisons for the next black rapper who is coming out. Dope lyrics are dope lyrics, and Ash passes the test with ease. The next thing on the horizon for Mr. Roth should be his reintroduction into the retail arena with the sophomore album “Is This Too Orange?”. The album is supposedly due in March, and I wish that release date could be set in stone. Hopefully it arrives on time, and at worse no later than summer. I’m pretty sure this will be music I want to cruise around with while the windows are down.