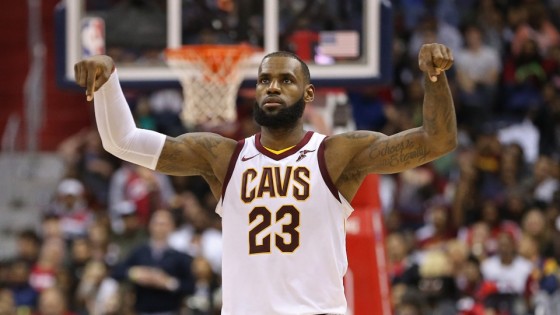 LeBron James is unlike anything we’ve ever seen. He is, at times, an amalgamation of singular talents that we have already witnessed. Other times he’s something different, yet so much more. So much more, in fact, that rather than grapple with the truth that a mere mortal is ascending to heights we never thought possible, we deny his humanity. To many viewers LeBron’s show of superhuman and often supernatural talent can’t be something a man has accomplished. No, it’s something a machine has accomplished. He isn’t a man, he’s the pinnacle of science.

He is a robot made in our image. When he bleeds, he doesn’t do so because he’s hurt. It’s because he has to convince us he’s one of us. When he tires, his literal battery is low. When he errs, it’s because his programming has malfunctioned.

While all in good fun, it’s a slap in the face of LeBron. His blood, flesh and bones. His connection to humankind.

What makes his abilities head scratching, and all that more amazing, isn’t that he operates in a near perfect manner that is resultant of algorithms that make a machine run more efficient. It’s that these abilities are done with the same materials you and I are made out of. He has pushed and stretched these materials to unfathomable heights.

His body has been through several lifetimes worth of wear and tear. It has seen enough ice to replenish the polar ice caps. His wrists. His feet. His hands, knees and shoulders. Something mechanical, something man-made, wouldn’t be nearly this impressive. No, this is something more. Someone surpassing the totality of the wonders of the world has been given to us to observe for more than a decade. Exerting enough energy to render any other human a mere husk, drained of the energy needed to move forward with life, LeBron continues on unabated.

The ferocity in dunks has not diminished. The hand catching an alley-oop is still able to scrape the top of the arena. His neurons still fire fast enough to see a play develop before anyone around it is even finished with the previous one.

This, all of it, is a testament to the human body once it has been pushed beyond what we can typically imagine. Some of LeBron’s accomplishments and displays of talent are cartoonish in nature. Even so, he still remains just a man. Just a man the way the Pacific Ocean is just a body of water. It’s easier to determine what his career hasn’t impacted than to determine the things it has.

One day when LeBron once again looks human enough for us to recognize him as one of us, we’ll be yanked back to reality. We’ll once again realize that the human body, while fallible, can sometimes perform in a way that outstrips current technological advancement.