I set out to see “The Place Beyond The Pines”, but instead I was treated to bare breasts, cocaine, repetitive lines and the Trap God himself, Gucci Mane.

“Spring Breakers” was just about everything I expected it to be, and yet I was still bewildered for the majority of the movie. The movie starts off slow, in a meandering sort of way, and it works for where you’re eventually going to be taken to by the end credits.  You’ll see the main four characters as runners trying to get away from a day to day life which they’ve grown too accustomed to, but who also have terribly unrealistic expectations of the lives they want to live. This is where spring break steps in. Spring break represents a normal escape for just about everyone else, but it represents a forever fantasy land for our four daring vixens. 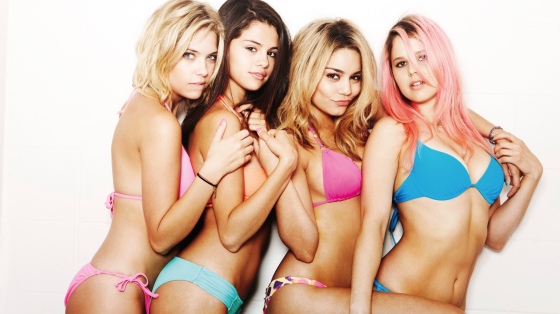 Once the adventure gets to the beaches, parties, booze and drugs, things get visually absurd. There were repetitive cut scenes before, but they were there to introduce a type of unwanted monotony. The beaches, on the other hand, represent a vibrant, eye-popping smorgasbord of life’s temptations for all of the spring breakers. Scenes alternate from meaningless hoots and hollers, to attempts at self realization, to girls who become allergic to bikini tops whenever Skrillex pumps through the speakers.

What’s there to do when things become one big blurred party though?

Introduce Alien, played by James Franco. Alien is a one man representation army of all the fun things that happen during spring break, as well as what goes on before, during and after the week of partying for some of the area’s shadier residents. Alien realizes the ridiculous circus that is his life, and feeds off of the vacationing college kids who head to his neck of the woods. It’s quite obvious that no one else, besides Alien, could possibly meet or surpass the aloof nature of our bonkers leading ladies.

But who or what could offer a counter balance for Alien?

None other than Gucci Mane. There’s no need to even say his character’s name, because they obviously gave Trap God a blank script and turned him loose. Gucci plays himself, which makes him a polarizing character against the backdrop of partying kids and Alien. He doesn’t say much, via speaking, but says a lot with his presence alone. Gucci Mane acts as a tether for the audience in the second half of the film, because if he wasn’t there it would be swept away by a sea of bright antics. Thank you Trap God, thank you.

Gucci on set with Rachel Korine

The ending may leave you with eyes squinted and mouth agape, but it will have been worth it in the end.

Do I recommend “Spring Breakers”? No, I can’t be responsible for that, but I also won’t caution you against seeing it.